Art, culture, performance, sound and language have the power not just to reflect society but also to instigate change and thus to shape it.
Europe in 2018 is far from the liberal role model many want it to be, and thought it was.
Society is fragmented and fundamental principles of living together in a respectful and democratic, diverse and shared community are being called into question, indeed undermined.
Fear-mongering and ignorance in the face of human need are being imbued with political acceptability as right-wing nationalist parties are elected into governments across Europe.
The flood of migrants, whose reasons for fleeing their countries are often rooted in Western colonial exploitation and failure to help in time, is seen as a threat.
Threatening, though, is the separation, the “us – and – them” mentality, the endorsement of differences in rights and privileges based on where you were born.

ALARM! The evening and its underlying concept are a reminder, a discourse, a call to the most basic elements of humanity and society.
The situation we are in should not be marked by political preference or allegiances but by the most basic, fundamental facts of living together that make society possible.

ALARM! Art, culture and discourse can and do instigate change. As practices and platforms, individual instances of creativity with broader resonances, they can reflect, distill, formulate and emanate not just their immediate context but also collective histories and future possibilities.

ALARM! The evening will commence with a reception, followed by a podium discussion between Dragica Rajcic and Johann Pätzold, hosted by Colette Schmidt, a cultural journalist who writes for the Austrian Der Standard and lives in Vienna. She also specializes in reporting on far-right extremist movements, human rights and the politics and culture of remembrance. As an author, she is a member of the Austrian theatre collective Theater im Bahnhof. Dragica Rajcic is a Croatian poet and thinker who lives between Austria, Switzerland and Croatia. She writes in the German she learned when she moved to Switzerland; the title of her first published volume of poetry reflects the linguistic and semantic background: Halbgedichte einer Gastfrau. Her work moves intellectually in the frictional space between syntax and semantics, between the expected and the other, between foreignness and the concept of home. Her partially autobiographical writing illuminates the concept of the generality that can grow out of an own trajectory and the shared elements inherent in individuality. Johann Pätzold is a musician and composer and an active member of Sea-Eye, an organisation dedicated to saving migrants from the Mediterranean sea. He worked on a lifeboat and recently published a number of statements online, answering questions posed to him during and after his time at sea. His stories and language reflect the potential brutality in our societies and nonetheless shine with the hope of an absolute imperative amongst some of us to help those less fortunate than ourselves. Sandra Kocuvan is an EU project advisor and represents the cultural department of the Austrian state of Styria in its external and foreign relations. She is also a member of the Alp-Adriatic Alliance committee.

ALARM! Art, music, discourse and social change are incredibly broad concepts and the evening does not intend to cover comprehensively any single aspect of any of the greater spheres. The evening brings audiences and participants together in a reflective space combining dialogue and performance.

ALARM is hosted by Mani d.o.o. in the context of Echoes from invisible Landscapes in cooperation with Klang.Haus Untergreith 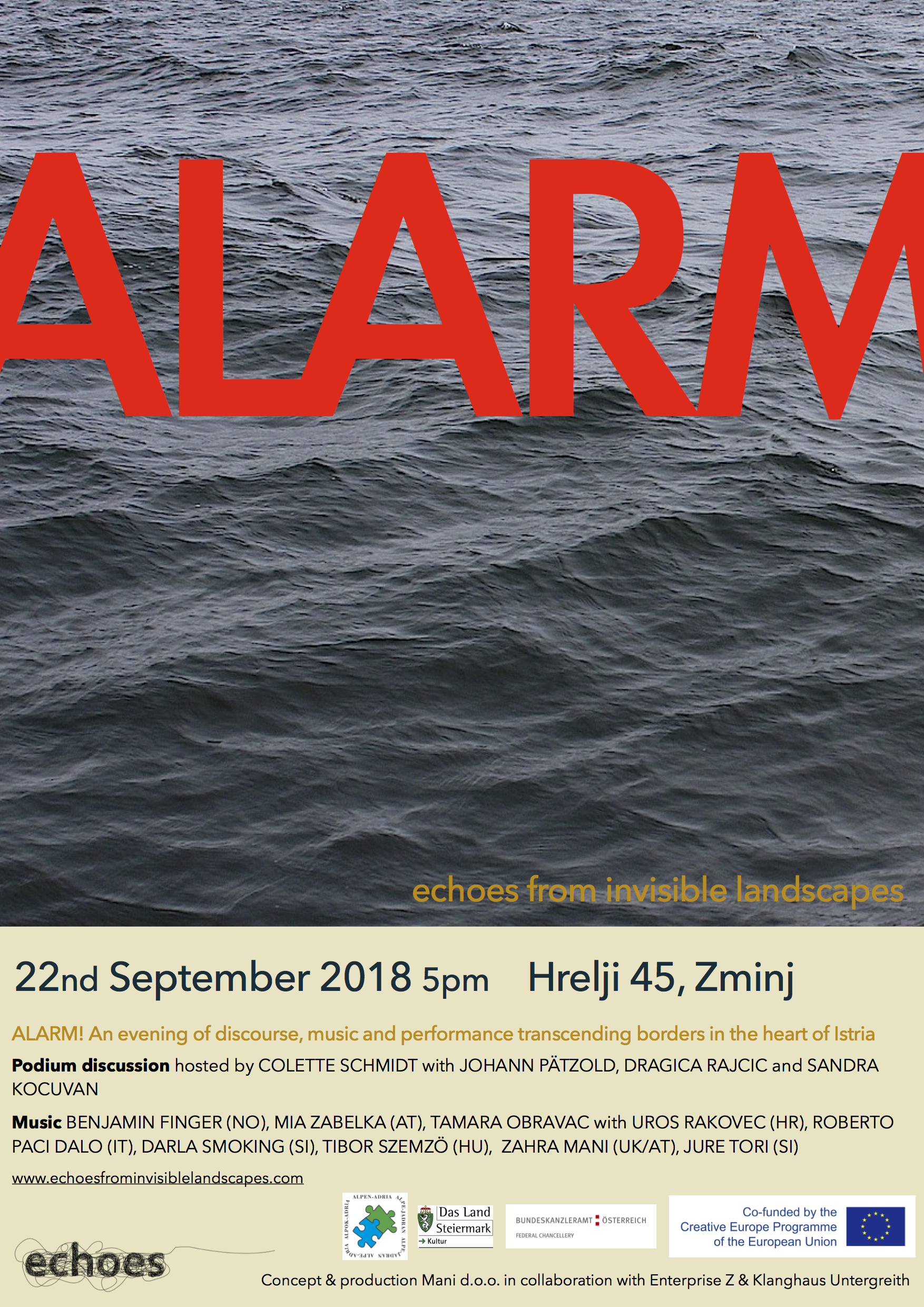